A Japanese scholar once said “The art of life is constant readjusting to your surroundings.”

Another weekend, another day at the beach. And, if possible, it was prettier than last weekend. Last week’s dolphins were replaced by this week’s brown pelicans. Starting in the late afternoon, small schools of fish were easy pickings for the feathered dive bombers. Every few seconds another seabird splashed down only to struggle back into flight before torpedoing back again…and again. To be an effective predator, you gotta get more calories out of your food than it takes to chase it. Lumbering back into the sky over and over is not much of a living. I’ve always been surprised that pelicans have succeeded as a species—but I’m so happy that they have. They’re the peaceful Air Force that keeps watch, shadowing our coast hour after daylight hour.

In the middle of today’s pelican fishing, I noticed one that looked really bad. It was sitting dejectedly outside a camper van at the beach. It looked like it had smelled its last smelt and was about to take a trip skyward on angel’s wings instead of its own. When my kids arrived for our beach picnic, I mentioned the pelican to Hannah, who said “Dad? Aren’t you going to try and save it?” Which got me to thinking about a question that often baffles me: “Do species ultimately suffer when humans interfere with the sick and dying?” Anyway, back to the suffering pelican; I decided, for the kids’ sake, I better call Sea World or whoever it is that saves pelicans (by the way, their number is 619-226-3910). And as I was looking out to sea, making the phone call—a warm rush of feathers passed by my head. Turns out the damn pelican didn’t need rescuing after all. Apparently, it shows up at the same time, at the same van everyday for dinner. He’s way more highly evolved than his pelican pals: He’s trained a human to feed him—no calories expended at all. So what did I learn from my day at the beach? Survival requires adaptation. 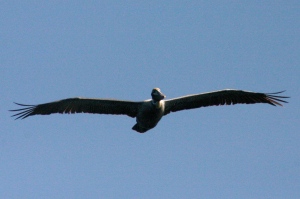 30 comments on “The Evolved Pelican”