There was a chance that the fluid was either (in order from best to worst news) dead/dying cancer cells, goo from the trauma of surgery (and/or hitting his head multiple times since), or new cancer cells forming.

HOORAY!  And a follow up MRI, 24 hours after surgery, revealed that it had not returned. Mom said she felt like driving down the street, windows open, yelling “THERE’S NO FLUID!!”

Mom had been {glam}camping in the new R.V. outside the hospital all week (with a german shepherd and two pomeranians in tow), and she was ready and waiting in her hospital-front campsite when Dad was sprung from his much bigger room at Scripps on Saturday morning (4/20/13).

From the hospital, he and Mom went where all people go after brain surgery———Nordstrom’s (of course)! Dad even attended a housewarming party that same day, where Graham played guitar and we all celebrated the latest good news.

On Sunday, Mom and Dad headed out for their first R.V. road trip! Their tentative plan is to drive up the coast toward wine country. I’ll post updates as I receive them.

Oh—In case you were wondering how things went when Dad read (on his own blog no less) that I’d crashed his car on the way to the hospital; Here’s the text I received from him on Friday morning (the day after the accident and subsequent blog post, where I slyly revealed it to Dad): 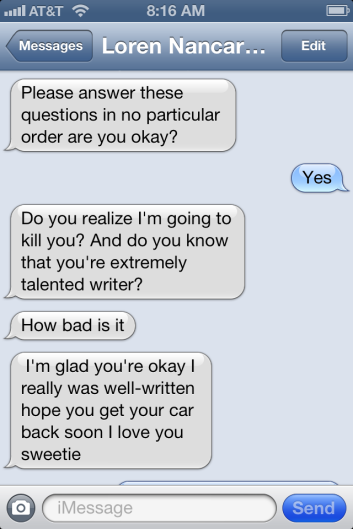 Hannah Jane Nancarrow is a San Diego State University alumni, with a B.A. in journalism and new media. After graduating in 2011, Hannah worked in local T.V. news before her dad was diagnosed with terminal brain cancer. Hannah managed and contributed to her dad’s incredibly popular blog (thenancarrowproject.com) and social media platforms before he passed away, after 11 months of bravely battling and blogging. The diagnosis was a catalyst for her own writing and for following each whim and dream. Today, Hannah writes her own blog and has been a keynote speaker at San Diego Women's Week, Relay for Life, and a top fundraiser for cancer-related causes throughout San Diego. Hannah also has a passion for health and fitness, since losing 75 pounds in 2011. She earned her Spinning® and group fitness instructor certifications, and teaches weekly cycle classes in Encinitas, California. Hannah also earned her real estate license and works in the family business, Nancarrow Realty Group, in North County San Diego.